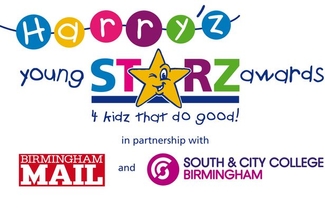 It's with enormous pleasure that I announce the Harry’z Young Starz Awards which will be held in partnership with the Birmingham Mail and South and City College on February 28, 2014.

Harry’z Young Starz Awards is something I have wanted to organise for over two years now because as a city we don’t seem to recognise our amazing youngsters who every day do extraordinary things which fall outside of the ‘norm’ of being a kid.

With that in mind I approached the Birmingham Mail and South and City College with the concept and reasoning behind it.

Though I’m Harry Moseley’s mum and founder and chair of HelpHarryHelpOthers, this is nothing to do with the charity as such – this is an event to give back and, like Harry, to inspire kids. It’s to recognise kids who are already doing amazing things and inspire others within our city to do good.

To enter we are looking for youngsters who really stand out.

There are both individual and class awards for some of the categories and full details of each category and requirement will be published over the next few weeks leading up to the awards.

We really hope you can have a think about any deserving child who really is amazing and nominate them.

Let’s celebrate these children who are doing great things within our city and inspire others to follow them and do good!