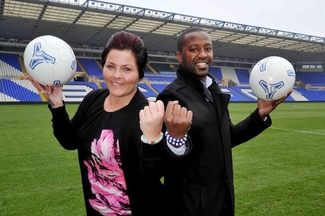 A who's who of Midland celebrities are expected at a black tie ball in Birmingham in aid of Harry Moseley’s cancer charity.

Ex-Blues star Michael Johnson and Villa favourite Ian Taylor will lay to rest their Second City rivalries and come together as ambassadors of Help Harry Help Others.

Organisers are hoping the event, which will feature a performance from The Voice finalist and Bartley Green resident Matt Henry, will raise more than the £100,000 generated at last year’s ball.

Harry’s mum Georgie set up HHHO last year to offer support to other families whose lives have been devastated by cancer.

The 39-year-old, from Sheldon, said she was “overwhelmed” by the support for the Yardley charity.

Harry raised more than £600,000 for charities during his short yet inspirational life by making and selling bracelets despite battling brain cancer.

Harry passed away in October 2011, aged just 11, but his fundraising legacy lives on through the charity.

PJ Ellis, a HHHO trustee, came up with the idea of a fundraising ball in memory of Harry.

“I feel very privileged to be part of something that is making such a huge difference to children with cancer,” he said.

Money will be raised on the night through ticket sales, silent auctions and a raffle of top prizes.